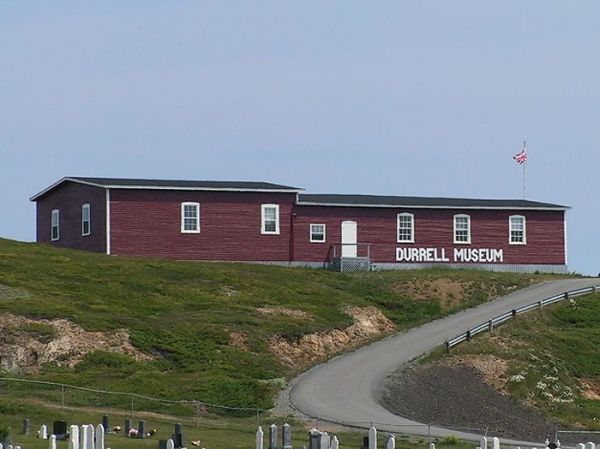 Built with free labour in 1910 as the Training Barracks and Armoury for a prestigious paramilitary organization in Durrell known as the Arm Lads Brigade. The museum is perched on the top of Old Maid Hill overlooking the picturesque town of Durrell. It provides a panoramic view overlooking the ocean and a photographer's paradise viewing and photographing majestic icebergs as they pass through Iceberg Alley. The museum houses Officers and Lads ALB uniforms, rifles (surplus from the Boer War, and the First and Second World Wars), brass band instruments and community artifacts depicting the way of life of a typical outport fishing settlement from the late 1800's and the early 1900's. A recent added attraction was a Mounted Polar Bear Exhibit in 2000.

A variety of locally hand made crafts and knitted items are offered for sale. Free internet access. The Durrell Museum and Crafts is fast becoming a major tourist attraction and destination of choice for the many tourists and visitors to Twillingate Islands.

LOCATION: At the top of Old Maid Hill, overlooking Durrell, South Twillingate Island. Follow Route 340 from Lewisporte or Route 330 from Gander to Twillingate, Notre Dame Bay. Turn right at Twillingate Main Street and continue for a couple kilometers into the beautiful town of Durrell.