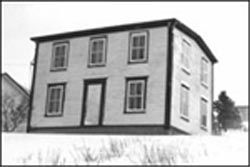 Drake House was constructed in the 1890s in the community of Haystack, Placentia Bay. It was constructed by George Drake and his brother John. Frank Drake, George's son, inherited the property and lived in the building all his life. "

Frank Drake passed away on Sunday, March 17, 2002, six months short of his 90th birthday. Frank was a very special person, and his passing is the end of an era. He firmly resisted the resettlement program, calling it the `shiftin racket' and decided in 1957, when all other families had left the community, that he would hang on there by himself. That he did until November, 1969, when he had his house towed across the bay to Arnold's Cove.