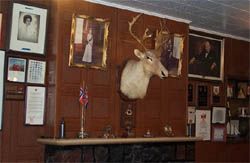 The museum is dedicated to preserving the service of Newfoundlanders who served in both World Wars, the Korean War and peacekeeping missions around the world. Exhibits at the museum include the Royal Newfoundland Regiment from the Beaumont Hamel, France during World War I, including trenchline maps. The Royal Artillery exhibit features action and training photos of the 59th Heavy Regiment which served in France, Belgium and Germany and the 166th Regiment which served in England, Italy and North Africa. The Royal Navy and Airforce are also featured, including photos and artifacts of the HMS Malaya, HMS Sedan and HMS Barhon which served `during World War II. Post World War II peacekeeping missions are also represented including Bosnia, Israel and Cyprus. The Canadian Army is also featured as well as a Memorial Room which includes medals and photos of local servicemen who were killed in action. Other artifacts on display include examples of Allies and Axis weaponry, and miscellaneous equipment such as mine detectors and field telephones.