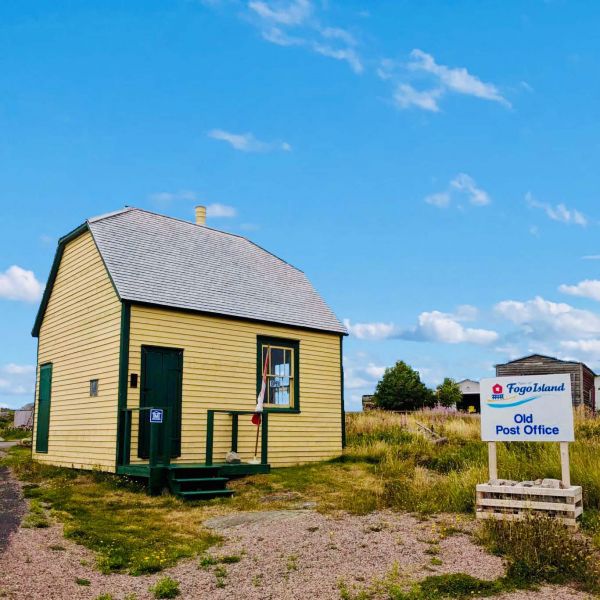 The original Post Office in Tilting was established in 1887 and it was set up as a waystation. For many years it was located in the local fishing premises of Patrick Bryan and Sons. Patrick Bryan was awarded the contract to build the new post office and construction began in 1907. The site chosen was on the back of the McGrath and Keough neighbourhoods. Mr. Bryan hired Mr. Marks Foley to be the foreman and main carpenter on the job. Much of the building material was brought into the community by Mr. Bryan. The building was completed in 1908 and it was officially opened in the spring of that year. The first postmistress was Mrs. Isabell (Burke) McGrath and the final postmistress, when the building was decommissioned in 1969, was Mrs. Nora Foley. She was the niece of Mrs. Bell.

When the Old Post Office closed it was purchased from Canada Post by Bryan Greene, the grandson of the original contractor. He owned the building for a number of years and then sold it to Emmeline and Edward Cluett. They then lived in the structure and operated a small convenience store called "Emmeline's Groceteria". The Cluett's moved out of the building in the early 1980's and then sold it to Ambrose and Gladys McGrath. It was used as a storage and woodshed until Gladys turned it over to the Town of Tilting in 2007,so that the process of securing restoration funding could begin.

The community of Tilting and the Tilting Recreation And Cultural Society collaborated with PTV Productions Inc. of Toronto, Ontario and in 2007 it was one of just 3 projects across Canada that was selected for a documentary on heritage conservation. The film crew visited Tilting on a number of occasions in order to film the documentary during restoration work and they also financially supported the overall restoration. This award is a testament to their commitment and resolve to become involved in a project in a small isolated community on the Northeast coast of Newfoundland and Labrador.

Tilting's Old Post Office is a small building with a partial hip roof, which identified its public function. It had a small waiting room, a storage room for coal, and an office. Some details like windows and wainscot were similar to materials used in some of the churches and larger public buildings on Fogo Island.

The restoration work was done with local labour, with the occasional participation of PTV"s crew during filming, to make the documentary film more engaging. http://www.savingplaces.ca/episode2.php

During the restoration work, a selection of old stamps were found and underneath an exterior mailbox that was hidden in the wall, a large selection of old coins, some dating back to to the early 1800's, were found. Underneath layer upon layer of canvas flooring, numerous, handwritten pages of telegraphs/telegrams, were retrieved. These sheets gave a daily account of the news from the battle front in WW1 and also local news from the courts etc.

The Old Post Office is operated as a museum.