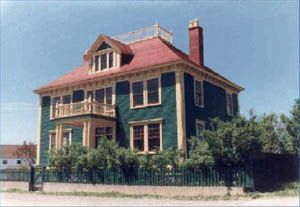 The Museum is located in George C. Harris House, designated a heritage structure by the Heritage Foundation of Newfoundland and Labrador. A typical Queen Anne structure, it was built in 1908 by local merchant George Harris. The building received the Manning Award in 1994 and the Southcott Award in 1996. As a Museum of Local History, exhibits portray domestic life and cultural pursuits of the community in the period of the bank fishery, 1881-1954. Interpreters are in period costume.