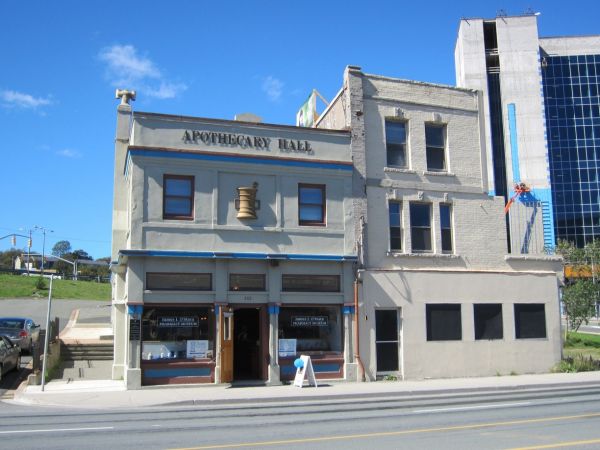 The building is the last remnant of the urban commercial street scape of Water Street West. Its architecture is a form of Art Noveau and Art Deco amalgam, and is particularly interesting because of its exterior decoration.

The focal point of the museum is a set of antique drug store fixtures, constructed of oak in England in 1879. They were brought to St. John’s the same year and installed in the drug store of M. Connors Limited Wholesale and Retail Druggists on Water Street at Queen Street. When this firm moved to a new location, the fixtures were sold to Donald Hogan and came into the possession of the former Newfoundland Pharmaceutical Association when Hogan’s Drug Store closed in 1975.

These fixtures are currently stocked with many of the medications found in drug stores just before the turn of the 20th century. Many of the actual medications can be seen in “shop bottles” used to hold the various liquids and powders. An ornate “show globe”, denoting the practice of pharmacy, made in New York in 1900, can be seen through the front window of the museum.

Throughout the museum, examples of equipment used by pharmacists can be seen including mortars and pestles; glass graduates; a variety of dispensing scales with brass weights; pill making machines; brass suppository molds; glass ointment slabs; cork presses; and label dispenser. A display of patent medicines can be seen, some reputedly to cure almost any illness.

The following link is a brief video of the history of the museum. https://www.youtube.com/watch?v=M26jgp6Ceqc